Better Learning Through Listening in the Classroom 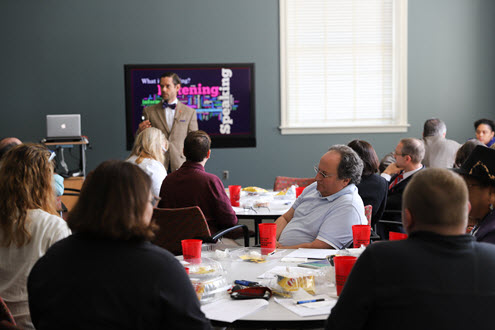 The concept of civil discourse is actually fairly hard to define says Dr. Graham Bodie, a visiting professor in the Meek School of Journalism and New Media. Bodie, who researches and teaches strategies for improving listening behavior, recently led a workshop for the Center for Excellence in Teaching and Learning titled, “The Role of Listening in Civil Discourse: Implementing the Listen First Model in the Classroom.”

Bodie began dispelling a number of myths about listening and respectful communication. For example, right now there is ample evidence that the public perceives our political landscape has become much less civil. However, Bodie shared some of the more impressive insults hurled by our country’s founding fathers, including this in a letter from Alexander Hamilton about John Adams:

“He is petty, mean, egotistic, erratic, eccentric, jealous natured, and hot-tempered … there are great and intrinsic defects in his character.”

(Of course, Adams got even with this reference to Hamilton: “That bastard brat of a Scottish peddler! His ambition, his restlessness and all his grandiose schemes come, I’m convinced, from a superabundance of secretions, which he couldn’t find enough whores to absorb!”)

With this type of rhetoric flying around for centuries, how do we keep the conversation on track in the classroom? Bodie told the crowd that any discussion of civil discourse has to start with one thing.

“How to listen to difference; how to find one thing, anything, you can agree with within the speech of one person, even if you mainly disagree,” Bodie said, “how to respect others by allowing them time and space to share opinion without fear of being shut down.”

Bodie says classrooms should be sites of social transformation where instructors and students find ways to communicate effectively.

“This is my bias, but I believe we best do that through teaching them to argue civilly.”

Though he recommends that students take an entire class on the subject when possible, he says educators from across the university can infuse their own curricula with opportunities for students to learn how to disagree effectively.

“Communication classes do a great job of teaching people how to argue, debate and speak their minds,” Bodie said, “but what students are really good at is standing up and saying ‘I believe…’ and then they sit down. We need to teach them to make an assertion and then defend it. Many of the beliefs we hold most dear are cultural truisms that we never question.”

One model requires the listener to start with a restatement: “What I heard you say is this,” and once there is that agreement, the listener has an opportunity to refute that statement.

To bring these strategies into the classroom, Bodie made a couple of key recommendations:

• Include your students in coming up with a working definition for what civility and listening to each other will look like in your classroom throughout the semester. Bodie says it’s nearly impossible to listen and be civil if you can’t agree on those parameters.
• Consider exploring the Listen First Project. This non-profit organization seeks to “encourage conversations towards increased respect and understanding” of differences. Students can take the “Listen First Pledge,” which says, “I will fully listen to and consider another’s views before sharing my own. I will prioritize respect and understanding in conversation. And I will encourage others to do the same.”

Bodie says there are three big myths about listening that contribute to the challenge of doing it effectively. Ultimately, listening is not tantamount to agreeing, it’s not a panacea that can solve all problems and it’s not easy. It is, however, important and it has always been in too short supply.