Will Norton, Jr., professor and Dean of the Meek School of Journalism and New Media at the University of Mississippi, has been tapped for induction into the Mississippi Press Association Hall of Fame.

Joining Norton on the list of those who have made lasting contributions to journalism was Carolyn Wilson, longtime chief executive of the state newspaper trade group.

Both were inducted at the MPA convention July 8 in Biloxi. 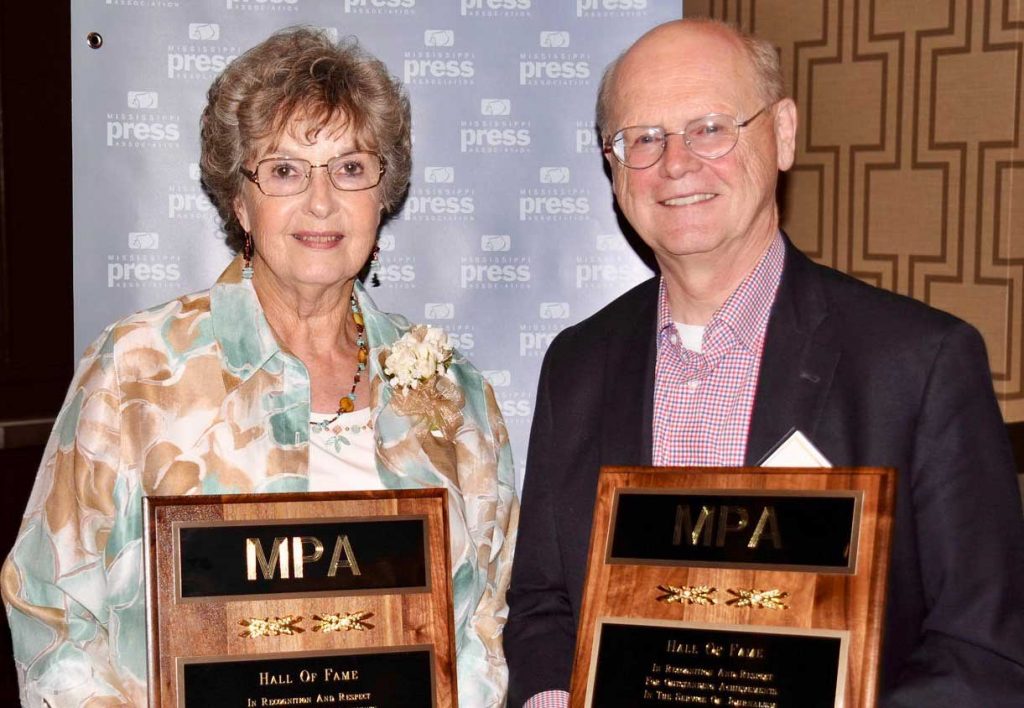 Carolyn Wilson, former director of the Mississippi Press Association, and Will Norton, Jr., dean of the Meek School at the University of Mississippi, were inducted into the state press Hall of Fame.

Norton, who previously served on the faculty and as chair of the Department of Journalism at Ole Miss, returned to Mississippi in 2009 as inaugural dean of the newly created Meek School. He holds a Ph.D. in Mass Communications from the University of Iowa and a Master of Arts in Journalism from Indiana University.

A partner in The South Reporter in Holly Springs, Norton was serving as dean of the College of Journalism and Mass Communications at the University of Nebraska-Lincoln when the innovative school at Ole Miss.
Under his leadership, the Meek School has experienced tremendous growth in enrollment and in scholarship dollars earned by its students.

He has been an active member both for MPA and the Nebraska Press Association, where he was inducted into the Journalism Hall of Fame in 2009.

Norton has been key in establishing newspaper “reporting expeditions” to member papers. Funded by the MPA Education Foundation, the trips allow a team of journalism majors to work over the course of several days on assignment for member newspapers.

“Will is a tremendous advocate for excellence in both the curriculum and practice of journalism,” said Layne Bruce, executive director of the MPA. “He’s also has been invaluable in strengthening the relationship between Ole Miss and our member newspapers.”

Wilson lives in Sandy Hook. She served as executive director of the MPA for 22 years was one of only two employees when she joined the staff in 1982. She was promoted to executive director in 1985. Under her leadership, the organization grew to a peak of a dozen employees and handled over $5 million in advertising placements for its member papers through its business subsidiary, Mississippi Press Services.

An Arkansas native, Wilson worked on behalf of newspaper members on such cornerstone issues as open records and sunshine laws, as well as internships for journalism students and continuing education for member employees. She was also key in the purchase of two headquarters locations for MPA in 1987 and 2002.

She retired in 2007 but continued to consult with MPA on contract through 2009.

“Those years of Carolyn’s hard work, along with the leadership of board members through the decades, has ensured MPA continues to be in a strong position to serve its members during an age of rapid change in our industry,” Bruce said. “She certainly deserves this honor, and we couldn’t be happier for her.”

The Hall of Fame was created in 1986. Inductees are chosen by a committee of past honorees and past presidents of MPA.