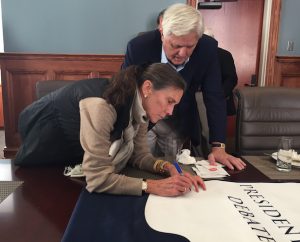 The executive director of the Commission on Presidential Debates, Janet Brown, and former Ole Miss Chancellor Robert Khayat signed two of the debate banners that were flown on campus prior to the 2008 debate in Oxford.

Janet Brown, long-time executive director of the Commission on Presidential Debates returned to the Ole Miss campus on November 7 to talk about one of the most exciting and challenging election seasons in American history. Brown shared her views on the importance of the debates to the democratic process and described how other countries are watching and learning from the U.S. political debate example.

Her visit also provided a chance for her to reconnect with former Ole Miss Chancellor Robert Khayat, who led the university’s successful bid to bring one of the 2008 debates to the Oxford campus.

The luncheon at the Overby Center for Southern Journalism & Politics brought together a number of faculty and distinguished visitors, including Susan Spencer of CBS and her husband Tom Oliphant, late of the Boston Globe and PBS News Hour.