A professor at the University of Mississippi’s Meek School of Journalism and New Media will present her work to discover and republish an archive of lost blogs, emails and other online writing from the years after Hurricane Katrina on Friday (Oct. 14) at the University of California at Los Angeles.

Cynthia Joyce is editor of “Please Forward: How blogging reconnected New Orleans after Katrina,” an anthology released Aug. 29, 2015, the 10th anniversary of the storm. The anthology mined blog posts and widely circulated emails from more than 75 blogs and online websites, many of which are no longer live. It weaves an intimate narrative of the first two years after the storm and the lives of the people who lived through it. 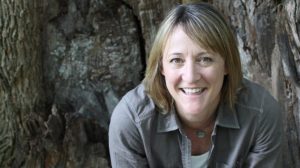 “The contributors to this anthology were so generous in allowing us to resurface their reflections from such a difficult part of their lives,” Joyce said. “We pulled those up and put them into print.

“Those posts – and the original blogs they were excerpted from – also deserve to be discoverable in an online context. Working with Archive-It made that possible.”

Hurricane Katrina, which made landfall on Aug. 29, 2005 near the Mississippi-Louisiana state line, killed 1,833 people in five states, including 231 in Mississippi. It’s often referred to as the most destructive natural disaster in U.S. history.

Joyce is participating in the “Dodging the Memory Hole: Saving Online News” forum at UCLA’s Young Research Library, hosted by Donald W. Reynolds Journalism Institute at the University of Missouri. She is part of the lightning round of participants, in which each panelist has three minutes to deliver their message.

Will Norton, dean of the Meek School, said Joyce’s colleagues are proud of her work.

“Cynthia Joyce is a first-rate journalist who brings years of work at the cutting edge of new media to her presentation at UCLA,” Norton said. “It says a lot about the Meek School that our faculty members are making presentations at prestigious institutions with other pioneering innovators.”

Joyce and the others involved in the anthology project used Archive-It, a web archiving service of Internet Archive used by more than 450 libraries, archives, universities, governments and researchers to collect, preserve and provide ongoing access to cultural heritage materials published on the web.

The anthology, which was published by University of New Orleans Press, will also be accessible and searchable online via the Internet Archive’s Archive-It database later this year. Jefferson Bailey, director of web archiving at Internet Archive/Archive-It, is also presenting at the conference.

“The web is the most significant publishing platform of our era, democratizing the ability to document our lives and communities for a global audience,” Bailey said. “Yet content on the web is highly ephemeral, often eluding the traditional process of historical preservation.

“We are excited to be able to collaborate with researchers like Cynthia Joyce, who bring local expertise and community knowledge, and work together to identify, archive and provide access to these historically valuable resources so that they remain available long into the future.”