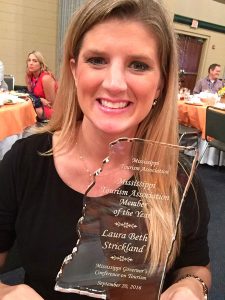 Strickland has been an integral leader in the rebranding of Vicksburg as The Key to the South, says a news release from the MTA. She has overseen the building and design of Vicksburg’s new responsive design website, launched a weekly blog and grown social media platforms to record levels. She also served as chair of the 2015 Mississippi Governor’s Conference on Tourism.

“Laura Beth is a special young woman who puts her heart into her work, whether it was in the classroom or now in her professional work,” Street said. “It also says a lot about her that she remained in her Mississippi to put her talents to use in bettering her hometown and home state.”

Strickland graduated in 2008 with B.A. in both journalism and English, along with a specialization in public relations. She joined the Vicksburg CVB in 2009 and has worked there ever since.

Her work has been recognized multiple times with awards for websites, special events and branding from the Public Relations Association of Mississippi. She has also been named to the Vicksburg Post’s list of the “Top 20 under 40.”