As their time as managers ends, we say farewell and thank you. They are headed to jobs and internships in New York, Los Angeles, Chicago and Orlando. 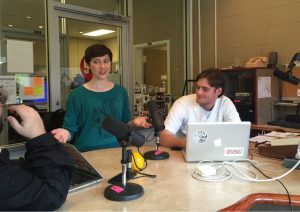 WUMS-FM 92.1 Rebel Radio is one of the few college student-run commercial FM radio stations in the country. The station broadcasts 24 hours a day, 7 days a week, and boasts a signal stretching nearly 40 miles across North Mississippi.

Hornsby is a junior integrated marketing Ccmmunications major from Starkville.

“Delegation has been the greatest challenge in this role,” Hornsby says. “You have to learn how to ask for and accept help from the people you work with. I’m proud of the things we do all the time, both on and off the air.”

Hornsby says the Student Media Center has been a gift to her.

“The Student Media Center has guided me. It helped me make new friends, get used to campus and meet older students who became my mentors and got me on track to find the best major for me.”

Additionally, Hornsby says she learned vital professional skills, such as teamwork, delegation and time management through her role as station manager.

“Amy Hornsby has just done a terrific job with radio this year,” said radio adviser Roy Frostenson. “She’s organized, dedicated and enthusiastic, all great traits for a radio station manager. She has assembled a great staff and they all work together very well which is a testament to Amy as a leader.”

Hornsby will spend fall semester 2016 in Orlando as a merchandising intern with the Disney College Program. After graduation in May 2017, she hopes to get involved in marketing for theater. Her ultimate goal is to combine the things she knows best: marketing, theater and radio. 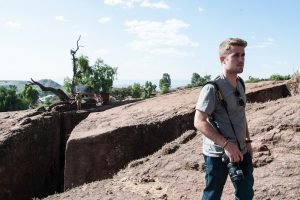 The senior from Tuscaloosa, Alabama, says friends encouraged him to take a journalism course. He realized how much he enjoyed interacting with people and telling their stories. He began writing for The Daily Mississippian, and remembers being excited when he saw his first byline in print.

Kirkland was a DM news editor during his junior year. After covering major stories on campus, he decided he wanted to take what he loved to the next step, and applied to be editor in chief for 2015-2016. He graduates this month with a bachelor of journalism degree.

He says his greatest challenge this past year has been making decisions about whether or not something should be published. “The subject matter can be touchy,” he says. “You want reaction, but you want it to be tasteful.”

Kirkland says he is most proud of his staff this year for the role it played in covering the campus controversy over taking down the state flag.

Patricia Thompson, director of student media and faculty adviser for The Daily Mississippian, praised Kirkland for his leadership of his staff and his individual work. The Society of Professional Journalists, for the second year in a row, has named The Daily Mississippian as one of the Top 3 best all-around student newspapers in the nation. Kirkland has won first-place awards in several contests for his writing and photography, including a multimedia project he produced from a journalism trip to Ethiopia.

“Logan is an ambitious, talented young journalist with a variety of skills that make him very marketable in this digital age,” Thompson says. “In addition to his editorial strengths, he has been an outstanding leader for the DM. There’s never a dull moment when Logan is in the newsroom. We will miss him, and we know he will have a successful career.”

This summer, Kirkland will work as a photo assistant at Harper’s Bazaar in New York. He said he would ultimately like to be a conflict photographer, working to document topics like conflict, war and poverty. 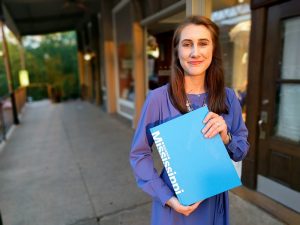 Mallory Simerville Lehenbauer with the 2016 The Ole Miss yearbook

Mallory Lehenbauer’s interest in the yearbook began when she applied for a position as yearbook writer her freshman year at Ole Miss. While she was a graduate assistant in the Student Media Center last year, her passion for the yearbook recurred.

Lehenbauer, a second-year graduate student in the Meek School’s integrated marketing communications program, received a bachelor’s degree in English and Southern Studies from Ole Miss in 2014. As an undergraduate, Lehenbauer worked in several writing and editing positions at The Daily Mississippian – including a summer as DM Editor in Chief.

“Mallory has been a valued member of student media for several years,” says Patricia Thompson, director of student media. “I was delighted when she applied to be yearbook editor. I knew that with her talent as a writer, editor, designer and leader, the yearbook would be in good hands and that she would lead her staff to produce a beautiful publication. She also used her IMC training to create branding and social media marketing for the yearbook.”

Published for the first time in 1896, The Ole Miss annual is the student yearbook that provides a permanent record of each year as seen and told by student staff.

The 2016 yearbook was distributed to students in late April.

Lehenbauer attributes much of The Ole Miss’ success to her staff. “They’re all amazing people and they make my job really easy,” she says.

“On a personal level, the Student Media Center has given me relationships with my peers that are forever. On a professional level, it has taught me to work in a fast-paced environment, meet deadlines and take criticism,” Lehenbauer says. “It is a mini professional environment hidden on the Ole Miss campus.”

Lehenbauer graduates this month, and is interviewing for jobs in Chicago. 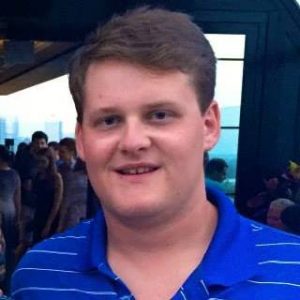 Evan Miller is a senior integrated marketing communications major from Decatur, Illinois. Evan’s father is a salesman, so he grew up knowing all about the demands and rewards of the career.

As the advertising manager for the past year and a half, Miller is most proud of hitting staff sales goals. He said the most rewarding part of his job has been helping new employees make their first sales.

“The Student Media Center has provided me with the opportunity to get real-world sales experience in a part-time setting,” Miller says. “It has been great for me.”

Roy Frostenson is the SMC assistant manager in charge of advertising. “In sales you’re only really measured one way and that’s by performance and the sales staff has performed extremely well under Evan’s leadership,” Frostenson says. “Our ad sales are up this year over last year and that’s to Evan’s credit. Evan does a good job working with our staff and making sure our advertisers are getting value for their investment with us.”

Miller graduates this month and has accepted a full-time sales job with Yelp in Chicago. 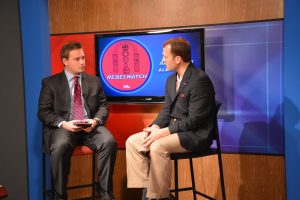 Stubbs loved the arts from a young age, but his passion for live television began in high school. He started an online sports network that broadcast more than 50 sporting events throughout the year. He would give play-by-play commentary on-air.

“From that moment on, I knew I wanted to do TV,” Stubbs says. “I had acted in films and in plays, but I just really liked being live. There is so much hard work and pre-production, and when you can turn that into something live, it’s just magical.”

NewsWatch Ole Miss is the only live, daily, student-produced newscast in Mississippi, and the only local television news broadcast in Lafayette County. The 30-minute program airs live 5 p.m. on channel 12, the university’s cable station, and is live streamed on theDMonline.com. A repeat broadcast airs at 10 p.m. on channel 12.

Stubbs worked his way up at NewsWatch from sports anchor, to sports director, to newscast manager.

“As I moved up with NewsWatch, I got to learn everything about it. I learned how to break a news story, how to put graphics together, how to edit video, how to produce a show, how to make sound, how to operate cameras. I just wanted to broaden my knowledge and learn everything I could.”

Stubbs also worked as a sports DJ for Rebel Radio, and as the basketball beat writer for The Daily Mississippian. He even has an article in the 2016 yearbook.
Stubbs says the most challenging part of his job was covering controversial topics, making sure everyone was ready to go at 5 p.m., and working to change the name of the show to NewsWatch Ole Miss. He added more sports coverage to NewsWatch by creating a Friday show called RebelWatch.

Stubbs and his NewsWatch staff have been honored this year with awards in several contests. NewsWatch, for the fifth year in a row, was named best college newscast in the state by the Mississippi Associated Press Broadcasters organization.

Nancy Dupont is faculty adviser for NewsWatch. “Browning’s dedication to TV journalism is obvious to anyone who meets him,” she says. “He throws himself, heart and soul, into every newscast. He knows how to lead a team to get the best result possible. He’s a wonderful student to work with.”

Stubbs graduates this month, and has a production internship with ESPN in Los Angeles.

Stubbs plans to use what he has learned at the Student Media Center in his career. “I hope I have a successful career and can give back to this place one day,” he says.