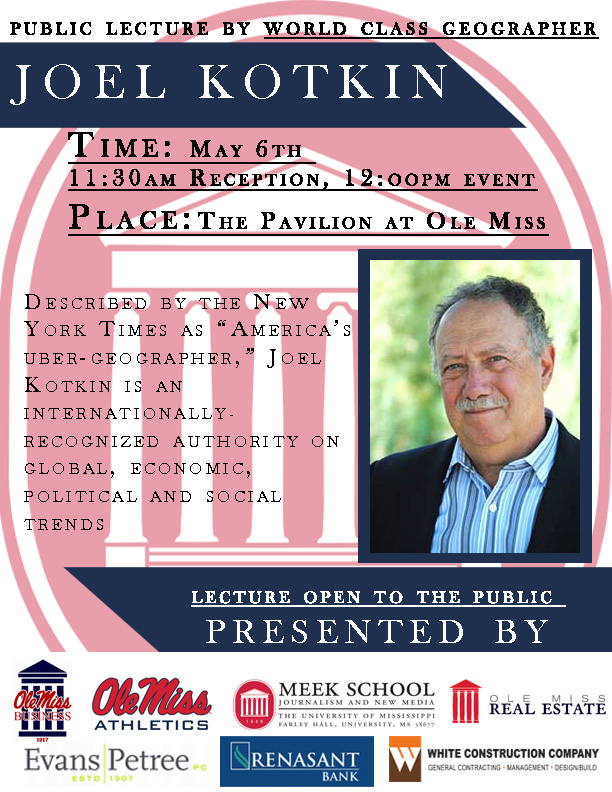 A respected professional in urban development is the guest speaker for a public forum Friday (May 6) at the University of Mississippi.

Joel Kotkin will address UM students and the local community in the Pavilion at Ole Miss beginning at 11:30 a.m. Chancellor Jeffery S. Vitter will deliver opening remarks. The author’s appearance is being co-sponsored by the UM Real Estate Advisory Board, Ole Miss Athletics, the School of Business Administration and the Meek School of Journalism and New Media.

“To the best of my knowledge, this is the first time in 36 years that academics and athletics at the University of Mississippi have joined together to sponsor an event such as this,” said Blake Tartt III, a UM marketing alum and owner of New Regional Planning in Dallas, Texas. “Joel Kotkin is an internationally recognized author and professional in the global, economic, political and social trends of urban development. He studies patterns, why people are moving and where they are moving.”

One of the ongoing conversations in Oxford has been expansion and economic development with the growing student and local populations. For example, Tartt noted that more than 50 percent of UM students are millenials from out-of-state. Also, more and more adults age 50-plus are moving away from urban areas and into non-urban/rural areas, similar to Oxford.

“All the members of the advisory board feel that it is extremely important to bring professionals like Joel Kotkin to the University of Mississippi,” Tartt said. “As urban development rapidly continues, it is essential that the Oxford’s infrastructure expand to accommodate its growth. That also helps create much need job opportunities in the state of Mississippi.”

Representatives of the other sponsors of the event echoed Tartt’s opinions.

“We believe this type of event, which students from throughout the campus may attend, enables students to be exposed to practical ideas which they may never have considered,” said Will Norton, dean of the Meek School of Journalism and New Media. “Despite the depth of his knowledge, the topics he addresses are so practical that students need to hear him so that they can be preparing themselves for internships and jobs.”

The Ole Miss Real Estate program partnered to provide an opportunity for students to engage in discussions and hear from industry leaders to put some perspective to the academic information and how it relates to the real world.

“We definitely realize the value of bringing speakers of the quality of Joel Kotkin to further prepare our students as they transition into the global workforce,” said Chip Wade, assistant professor of Finance. “Joel Kotkin is a forward thinker with great insight into topics ranging from the future of class in global cities to the places with the best opportunities for minorities. These are extremely pertinent topics in today’s economic landscape. Moreover, these are challenges that the Millennium generation is going to have to address head on.”

Ole Miss Athletics is proud to be able to help host Kotkin as he shares his views on the future growth of Oxford, said Stephen Ponder, senior executive associate athletics director.

“It is an exciting time to be at Ole Miss and I think campus and our community will find the remarks beneficial as our leaders continue to work on plans for campus and Oxford,” he said. “We want to be an integral part of our campus and community beyond athletics.”

Kotkin is the Presidential Fellow in Urban Futures at Chapman University in Orange, California and Executive Director of the Houston-based Center for Opportunity Urbanism (opportunityurbanism.org). He is executive editor of the widely-read website www.newgeography.com and writes the weekly “New Geographer” column for Forbes.com. Kotkin serves on the editorial board of the Orange County Register and writes a weekly column for that paper. He is also a regular contributor to the Daily Beast and Real Clear Politics.

His new book, “The Human City: Urbanism for the Rest of Us” was published by Agate in April. Other books by Kotkin include the critically-acclaimed “The New Class Conflict” (Telos Press), “The Next Hundred Million: America in 2050” (Penguin Press), “The City: A Global History” and “Tribes: How Race, Religion and Identity Are Reshaping the Global Economy.”

Kotkin has published reports on topics ranging from the future of class in global cities to the places with the best opportunities for minorities. His 2013 report, “Post-familialism: Humanity’s Future,” an examination of the world’s future demography, was published by the Civil Service College of Singapore and Chapman University and has been widely commented on not only in the United States, but in Israel, Brazil, Canada and other countries.

Over the past decade, the speaker has completed studies focusing on several major cities, including a worldwide study focusing on the future of London, Mumbai and Mexico City, and studies of New York, Los Angeles, New Orleans, Houston, San Bernardino and St. Louis, among others. In 2010, he completed an international study on “the new world order” for the Legatum Institute in London, United Kingdom that traced trans-national ethnic networks, particularly in East Asia.

Kotkin also has worked in smaller communities, including a report -working with Praxis Strategy Group – on the rise of the Great Plains for Texas Tech University. Currently, he is coordinating major studies on Texas urbanism, the future of localism and the re-industrialization of the American heartland for the Center for Opportunity Urbanism. As director of the Center for Demographics and Policy at Chapman, he was the lead author of a major study on housing, and is currently involved in a project about the future of Orange County, California.

For more information about the UM School of Business Administration, visit http://business.olemiss.edu.