The Lasting Impact of Ed Meek’s “RIOT: Witness to Anger and Change” 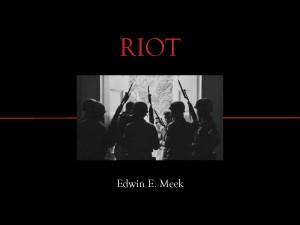 On Dec. 3 at noon, Dr. Ed Meek will present a slide show at the Oxford-Lafayette County Public Library featuring photos from his new book, Riot: Witness to Anger and Change, co-published this fall by Yoknapatawpha Press and the Meek School of Journalism and New Media.

When a 1962 student demonstration in the Circle protesting the university’s admission of James Meredith turned violent, Meek, a 22-year-old graduate of Ole Miss and staff photographer for the University of Mississippi’s Public Information Office, was first at the scene. He stayed up all night and took more than 500 photos, including exclusive shots of Meredith in the classroom. Riot contains an Introduction by Curtis Wilkie, who as a student also was in the Circle that night; the Afterword is by former Gov. William Winter.

At a book-signing in Jackson, Sept. 9, James Meredith warmly endorsed Meek’s book, calling it the “best of hundreds” written about the events surrounding Meredith’s admission to The University of Mississippi in 1962.

“I read the book three times, and it is the best of all. There is one photo in there that will last a thousand years,” Meredith said, referring to the cover photo of paratroopers of the 101st Airborne Division guarding the Lyceum Building with bayonet-mounted rifles.

On Sept. 30, the 53rd anniversary of the 1962 Ole Miss riot, the Overby Center for Southern Journalism and Politics hosted a panel discussion by Ed Meek, former Gov. William Winter and Overby Fellow Curtis Wilkie about the night that altered the history of the University of Mississippi.

Meek reflected on what Meredith’s admission meant to Ole Miss, the state of Mississippi and to him personally. Covering the 1962 riot was a turning point, he said, leading him to confront the mistakes of the past and to support and foster integration and diversity in the public schools and work place.

Governor William F. Winter observed that Mississippi has much to teach the rest of the nation in regard to race relations: “Having been the state where some of the most extreme battles over integration were fought, we can now appreciate more fully the progress we have made.”