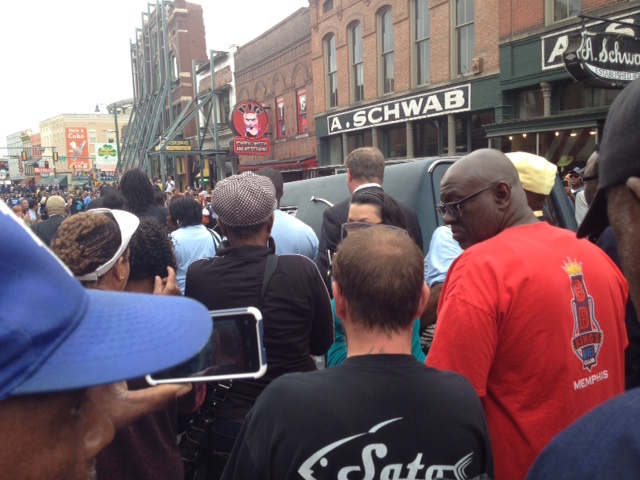 A hearse bearing the body of blues great B.B. King passes the famous A. Schwab store on Beale Street in Memphis. Throngs turned out with happy memories of the beloved musician. The cortege traveled to Indianola in the Mississippi Delta, near King’s birthplace and the site of his burial.

MEMPHIS – John White, a 35-year-old schoolteacher in Memphis who got his graduate degree at the University of Mississippi, said he picked up the phone one day as a young fellow and B.B. King was on the line.

“I couldn’t believe it,” he recalled with a laugh.

He found out that King knew his grandmother, Claudia Jackson. They used to date. “She has a photograph of her with B.B. on one side and Elvis on the other.”

White was one of thousands of fans crowding the sidewalks of Beale Street here in Memphis May 27 as the great bluesman made his last journey down the street where he began his career. King died earlier this month at his home in Las Vegas at the age of 89.

A New Orleans-style brass band played “The Thrill Is Gone” and other classics as it marched down Beale in front of the long, black hearse that had carried King from the Memphis airport, where he had been flown in from Las Vegas, and would bring him to his final resting place in Indianola, Miss.

People called out “We love you, B.B.!” and “Rest in peace, B.B.” as the hearse passed by the B.B. King Blues Club and A. Schwab’s dry goods store and made its way toward Third Street, where it turned right onto what becomes Highway 61 direction Mississippi Delta. When the hearse came to a stop just past Beale, women walked up to the back of it and kissed the rear view mirror repeatedly. Many cried.

Famous blues singers like Bobby Rush were in the crowd, but most were regular folks like Lucille Shields and Latham Walker.

Of course, “Lucille” was also the name B.B. King gave his guitars after a long-ago dispute between two men over a woman by that name. The dispute took place in an Arkansas dance club where King was performing and led to a fire and King’s desperate rescue of his guitar from the blazes.

“I’ve been listening to the blues since I was five,” 59-year-old Shields said. “I’m here to celebrate B.B. King’s homecoming from Las Vegas to Beale to back home in Mississippi.”

Latham Walker, 61, is another Memphian who loves B.B. King and the blues. “I’m first cousin with Rufus Thomas,” he said proudly, referring to another Beale Street legend known for his classic “Walkin’ the Dog.” “The blues will never die. The blues will be forever. Everyday everybody’s going through something.”

I interviewed King back in 2004, and we talked about his career and the future of the blues. He recalled his influences — from his cousin, early era country blues singer Bukka White, to the music he heard up and down Beale Street in the 1940s. Today “there is a young guy, Kenny Wayne Shepherd, Keb Mo, Corey Harris,” King said. “They don’t play what I play. I don’t play like Bukka did. I wish I could. What I’m trying to say is that each generation brings about their own musicians.”

Maybe among those thousands mourning and celebrating B.B. King on Beale Street Wednesday were a handful of young blues musician waiting for their chance and knowing they’d never forget the day they paid their last respects to the King.

Joe Atkins is a professor of Journalism in the Meek School of Journalism and New Media. He is the author of numerous scholarly works and a new novel, “Casey’s Last Chance.”