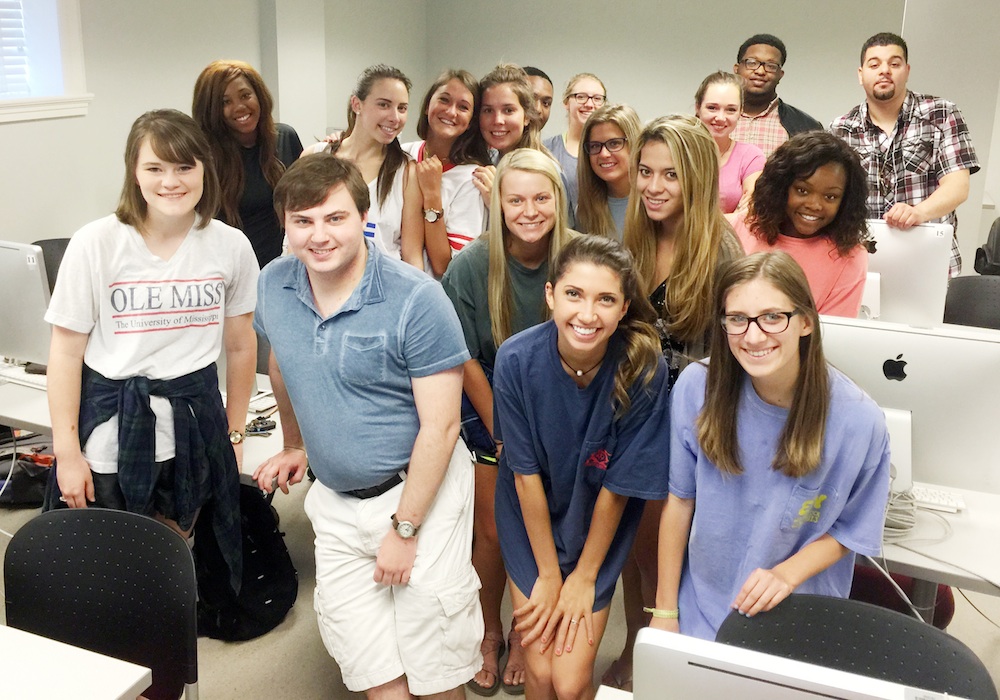 Students from one section of the Meek School of Journalism and New Media’s multimedia news reporting class were recognized during an awards ceremony on the last day of class this semester.

Oxford Stories, an online publication at OxfordStories.net, was launched in the fall of 2015 as a website where journalism students could publish their work and share it on social media. The first semester ended with approximately 5,000 page views.

This semester, readership grew as students better promoted themselves on Facebook and Twitter, sharing stories that their friends, family, and the public could read. The semester ended with 17,184 page views, more than twice the amount of page views recorded for the first semester.

“It seemed a little wasteful to have students write 5-10 stories over the semester that weren’t being published or shared online, especially when some of the stories were very well written,” said LaReeca Rucker, adjunct journalism instructor. “Creating an online publication for students to showcase their work was a way for them to get their stories out there and learn about the power of social media, while taking the content they produce more seriously. Their name is on every story published, and in an Internet and new media age, their stories have almost as much power to travel the globe as a story written by a large daily newspaper.”

Not every story makes the cut. Only the best ones with all of the required elements are posted to the site, an incentive to do good work.

“It’s also designed to be fun,” said Rucker. “Students are part of a staff, and teamwork is encouraged. It was nice to see them support and cheer each other on during the award ceremony.”

Rucker said using the website is also a way for students to easily turn in their work, and it encourages them to stick to deadlines, because the website records the exact time and date the stories are entered into the system.

“Students are taught the basics of WordPress so that they may submit their work,” she said, “and since WordPress is a popular blogging and website tool, they learn how to work with multimedia using a content management system.”

During the fall semester, students wrote about a variety of topics, including organic farming, Vietnam veterans, racism, the special needs community, challenges of international students, sexual assault on campus, police militarization, and the local arts scene.

During the spring, students wrote about the single motherhood, the University of Mississippi Pride group for LGBTQ students, the resurrection of vinyl records, the perception of the University of Mississippi, religion issues, campaign finance reform, feminism, living with chronic pain, the Oxford community’s growing acceptance of gay couples and the history of the UM Gospel choir. They also studied a murder case and wrote about criminal justice issues surrounding it.

For motivation during the spring semester, students were told an awards ceremony would be held on the last day of class modeled after the Mississippi Press Association’s annual award’s ceremony.

Awards were based on WordPress website stats and analytics of the students’ most well-read stories. Each student received an award for their best work, with four students taking home top honors as reporters and writers of the year.