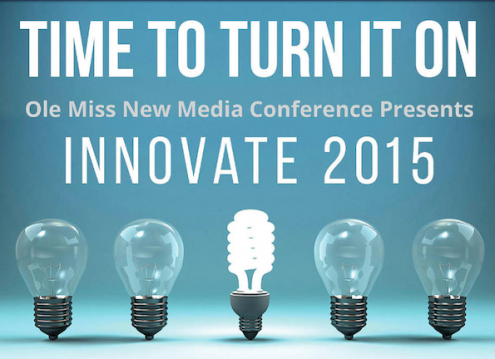 It’s a rare business that doesn’t see the need to innovate, and the news and information industries have never needed to try new things more than they do now.

“Culture is the key word,” says Hank Price, general manager of WVTM-TV in Birmingham. “It’s very difficult to innovate; the more successful a company is at doing what they currently do, the more difficult it is for them to innovate.”

Price, who is one of the speakers at the Ole Miss New Media Conference (OMNM) on April 9 in The Overby Center Auditorium on the Oxford campus, says that companies often don’t think about innovation until it’s too late. He says media businesses have a tremendous opportunity right now.

“The door is open for anything we want to do,” Price said. “The consumer has never been more willing to accept fresh ideas. It’s a fantastic time to really look at how we can interact with the consumer in ways that are valuable and important.”

In addition to speaking at the conference, Price is one of the authors of a new book about news media management. Called “Managing Today’s Media: Audience First,” he wrote the book with Ole Miss journalism professors Deb Wenger and Samir Husni. It should be available in August of this year.

The OMNM Conference will kick off at 9:30 a.m. with remarks from Lewis D’Vorkin, Forbes Media’s chief product officer, a man responsible for the company’s digital and print platforms, including Forbes.com on desktop, mobile and tablets.

The conference will also feature USA TODAY’s Fred Anklam. Anklam is an Ole Miss graduate who will be receiving the Meek School of Journalism & New Media’s Silver Em Award. The award honors Mississippi journalists who have contributed a great deal to the profession.

Registration for the conference is now open. It costs $50 to attend and includes lunch in the Grove. Price hopes participants will come away understanding one important point.

“The fact is that you can’t innovate without failure. I don’t have any hard numbers, but I would guess looking at my own failure rate, I think it’s about 80 percent. The reality is you have to do a number of things wrong before you find your success.”