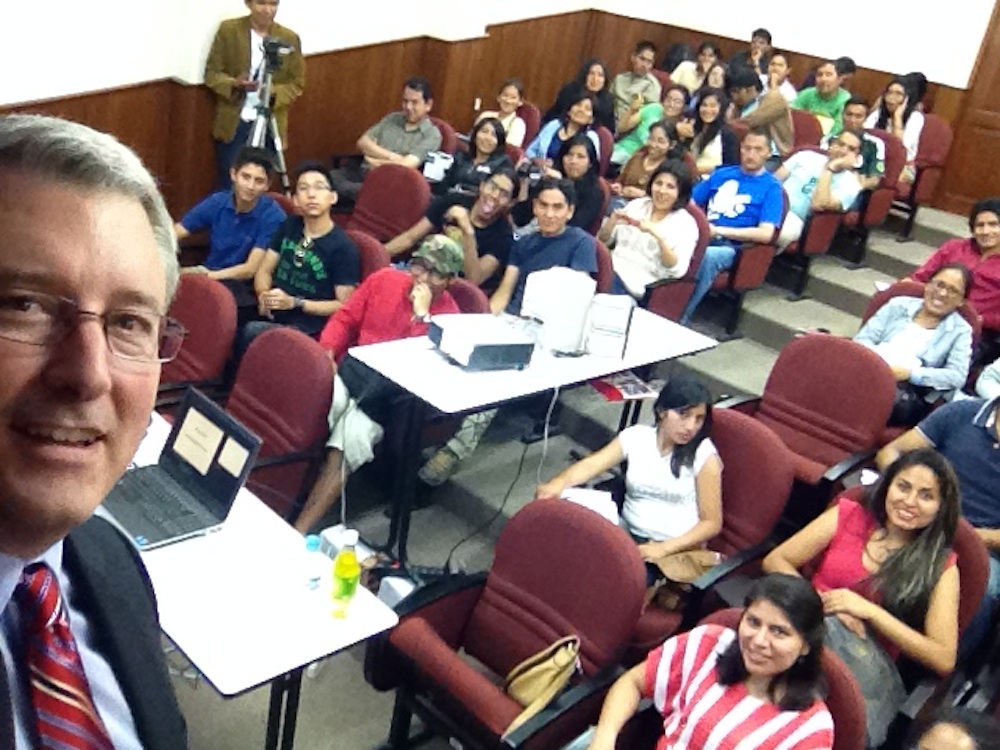 Dr. Robert Magee with audience at one of his sessions.

Dr. Robert Magee, assistant professor in the Meek School, led a series of workshops on persuasion for media professionals in Sucre, Bolivia, October 17 and 18.

“I am so happy to hear from my people in Sucre that the workshop with Robert went so well,” said Geri Magnus Nyborg, a professor at NLA. “They want him back next year.”

Magee offered four sessions: Culture and communication: Implications for journalism and persuasion; Effects of format on verbal and nonverbal information; Cognitive processes in persuasion; and Narratives and persuasion: Changing attitudes through stories.

In the western hemisphere, only the National University of San Marcos in Lima, Peru, chartered in 1551, is older.  In comparison, Harvard, the oldest institution of higher learning in the U.S., was established in 1636.

Founded with the wealthy gentry of South America in mind, the University of San Francisco Xavier’s role and reach gradually expanded during the next 150 years.

By the turn of the 19th century USFX became a focal point for revolutionary thought in the region and later had a direct role not only in Bolivia’s independence, but in that of most of the former Spanish colonies as well.

In 1825 when Bolivia gained independence, it became the nation’s main university and remained an important institution on the continent, particularly for its law faculty which attracted students from throughout the region.

Topics of the workshops include the way narratives can be used as a means to inform and persuade, and the significance of the effects of culture on communication.  The workshops are geared toward professionals and academics with interest in journalism, advertising, and public relations.